Looking for a Veterinarian in the Hebron CT Area?

Hebron Veterinary Hospital | About Us 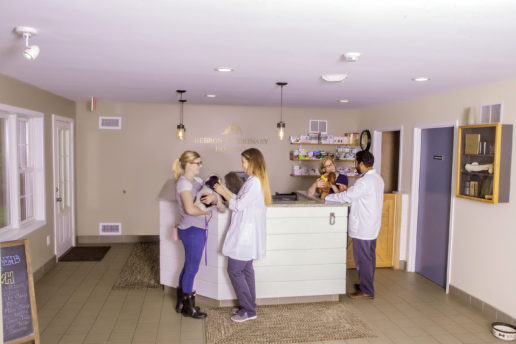 The Hebron Veterinary Hospital has been a part of the community since 1984. Dr. Kim Mordasky purchased HVH in 2015 to continue the community tradition. With so many corporations taking over veterinary medicine in the area, she wanted local pet owners to have access to a caring family practice. She wanted HVH to provide quality care in a friendly environment where clients and pets didn’t get lost in the system.

We’ve equipped our hospital with state-of-the-art technologies for modern efficient diagnoses and treatment. Our staff works hard to make sure your pets have the quality care they deserve. 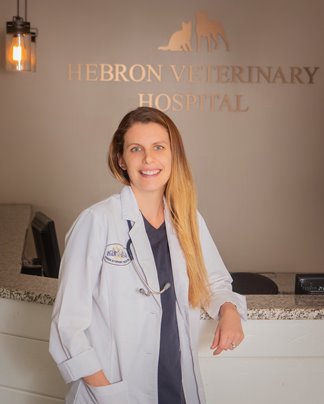 Dr. Mordasky grew up in South Windsor. She graduated from the University of Connecticut in 2011, earning degrees in Animal Science and Pathobiology and continued her studies at Purdue University School of Veterinary Medicine. After returning to Connecticut in 2012, she settled down in Hebron and bought Hebron Veterinary Hospital. Her professional interests include small animal surgery, ophthalmology, and internal medicine. Dr. Mordasky, her husband, sons, Doc, and 2 cats are excited to be a part of such a beautiful community.

Dr. De Leon earned his veterinary medicine degree at the National University of Costa Rica. Since moving to Connecticut in 2006, he has worked as a veterinarian for 10 years, including a three-year Medical Director position. His professional interests include soft tissues, orthopedic surgery, oral surgery, and dentistry. He’s experienced in knee surgery, fracture repair, and laser therapy. Dr. DeLeon is originally from Panama and currently lives in Mansfield with his wife, three children, and three dogs. 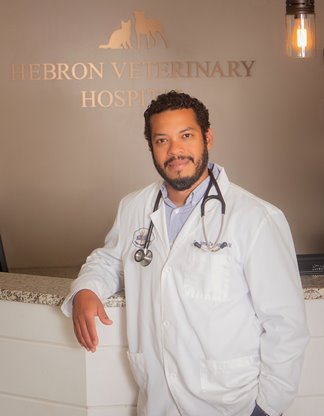 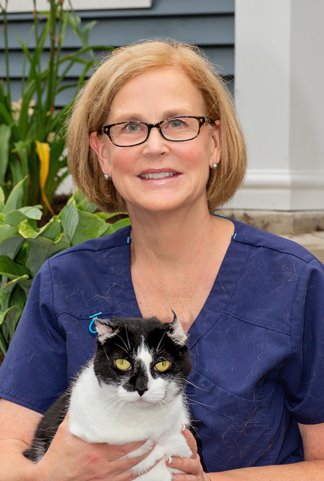 Nancy has been working at HVH since 1995. She grew up in Pittsburgh, PA and moved to Boston after college for 10 years. After getting married she settled in Columbia, CT. She has 2 adult children and 4 rescue dogs. She was a former volunteer for Dog Gone Recovery and also a Licensed Wildlife Rehabilitator. She enjoys walking with her dogs, gardening and spending time with her family.

Robbin joined HVH in March of 2017. She has been a resident of Hebron for 18 years with her husband and three daughters. Robbin graduated from Clemson University with a degree in French and International Marketing, where she also originally met her husband. She loves animals and has a rescue dog, Gracie, and two cats, Smokey and Annie. She enjoys spending time with her family, sports (especially any that her girls’ play and college football), hiking, and trips to the beach. 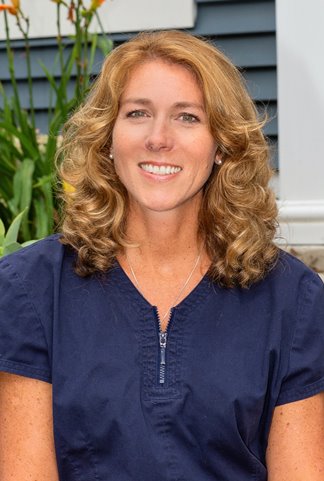 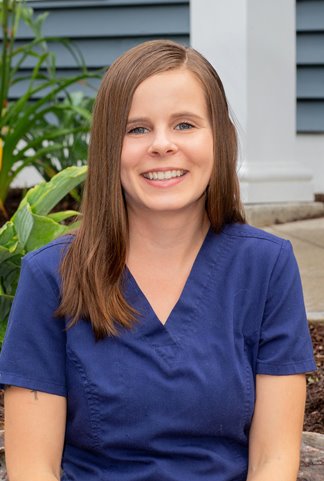 Stephanie came to HVH as an intern while finishing her veterinary tech certification program through NCCC. She joined our staff full-time in 2017. She lives with her husband and their German Shepherd, Soto. In her off hours, Stephanie enjoys spending time with her family, hiking, running, and exploring New England.

Beth joined our staff in 2017. She grew up in PA, where her love for animals began and continued to grow. She started working in the veterinary field at 19 and has been doing so ever since. Her passion and love for her job, and the animals she cares for, shines through with every patient she meets. Outside of HVH she loves spending time with her husband, 3 sons, dog, and cat. She loves camping, hiking, and finding peace in the outdoors! 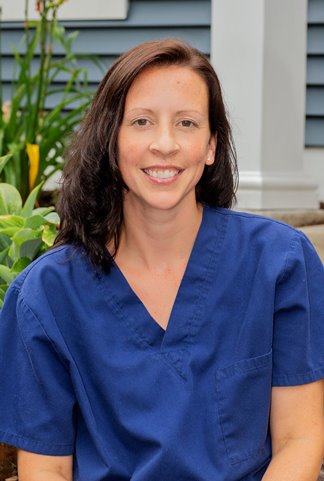 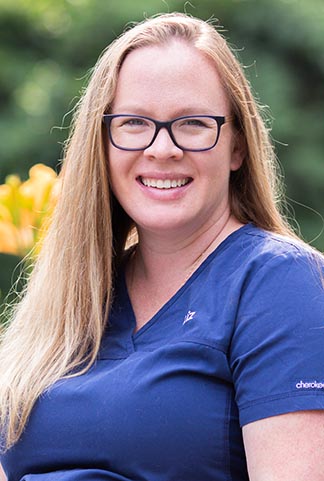 Liz has been a vet tech for 8 years. While her degree is in equine science, she developed a love for small animal medicine and turned it into a career. Her favorite part of being a tech at Hebron veterinary Hospital is the ability to connect with clients and their pets on a personal level as well as all the interesting procedures that she gets to assist with. In her spare time, Liz likes to spend time with her husband Stephen , 2 wonderful daughters Fiona and Charlotte, dogs Madison and Archer, and their pony Pickpocket.

Lauren grew up in Middlefield and Durham. She graduated from Western Connecticut State University in 2009, earning a Bachelor of Arts in Communication. She also graduated from Middlesex Community College in 2017, earning an Associate in Science in Veterinary Technology. In June of 2010, she settled down in East Hampton and bought her first house with her husband. She joined the HVH team in May of 2019. By September, she was married on the beach in North Truro, Massachusetts. In October of 2020, she and her husband welcomed their first child, Angelica, into the world. They rescued their little Shih Tzu mix, Gus, back in 2013. They loved and lost two cats. Mooshkie was 15 years-old and passed this year. Last year, Punky passed from cancer at just 7 years-old. Lauren’s greatest joy is her family, whom she loves traveling with, mainly to the Florida Keys or Cape Cod. She also enjoys scenic hikes and lounging on the beach. 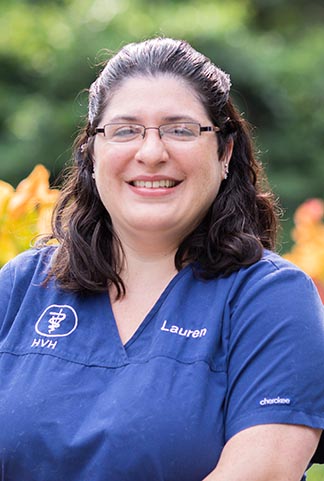 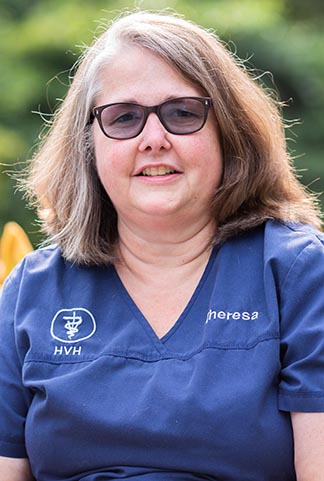 Theresa started in February 2019. She has 22 years in the veterinary field. She works as room tech but has done surgical tech and front desk. Never know where you can find her!
She lives in Ashford with her husband. She also has an adult son that lives in Florida. She has 2 dogs & 2 cats. All rescues! She enjoys the outdoors and crafts.

Karen joined our HVH team in September of 2020. She worked as a Veterinary Technician for over 10 years, and is currently working at the front desk with Daryl assisting clients.
Outside of work she enjoys heading to the shore or mountains exploring new places with her husband. Or simply spending time with her family, her dogs Quinn & Grace O’Malley, and cat Richie. 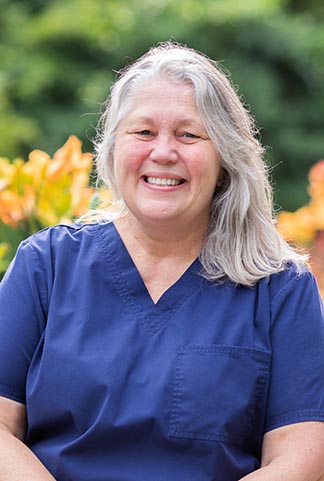 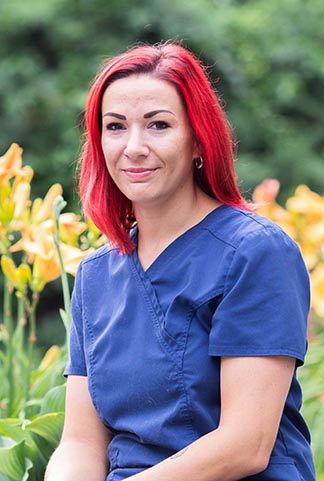 Claudia is from Germany and came to the US in 2005. She started at HVH as an intern while working on her Veterinary Assistant Certification. She joined HVH full-time in January 2020. Claudia lives with her husband, their two kids, four dogs, and lots of other critters. She has been a volunteer for POA since 2011 and in her spare time, Claudia enjoys working out, horseback riding, and hiking with her dogs.

Kelly grew up in Lebanon, CT. She graduated from Morse School of Business in 1993. After owning her own child care business for over 21 years, she decided it was time for a change from human babies to fur babies. In addition to her love for children and animals, Kelly is an avid crafter and loves being creative. She enjoys camping and boating with her family and is a Disney fanatic! Kelly, her husband, son and daughter have lived in Hebron since 2011. Their family also includes a rescue cat and dog. 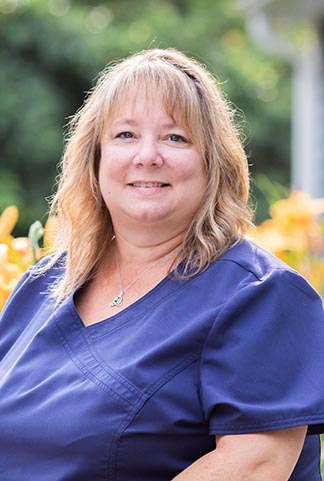 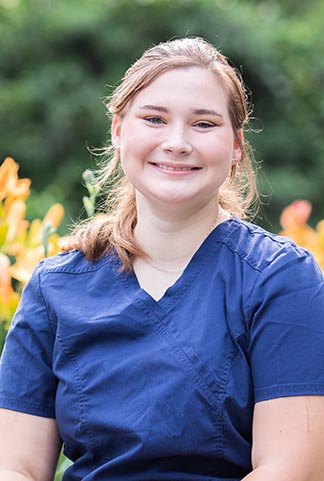 Catherine joined HVH in the spring of 2021 while finishing her degree. She graduated from UConn with a B.S. in pathobiology in May 2021. She lives in Bolton with her family and golden retriever, Big Red. Outside of HVH she loves roller skating and collecting tropical plants. 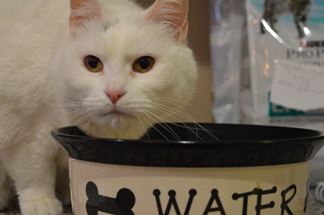 Mama has been living at HVH for about 12 years. She was dropped off with her litter of kittens in 2006, where the staff brought her in and helped raise her kittens. They each found their way a good home but Mama stayed right in the hospital. She was very shy at the start however after some coaxing has come around to grace clients with her presence. She’s often found napping in little hideouts throughout the hospital.

Daryl was found by a local couple during a snowstorm in 2016. In extremely rough shape, Dr. Mordasky wasn’t sure that he would survive through his ordeal. He weighed only four pounds and suffered from frostbite on his tail and ears. Several days following his initial admission he also coughed up a piece of metal, which we believe he was trying to eat because he was so hungry. Dr. M also chose the name Daryl from her love of the AMC show The Walking Dead, appropriate considering the shape he was in. Since then, Daryl has become the icon of the hospital, greeting clients and patients at the door and making sure everyone knows who’s really in charge at HVH. 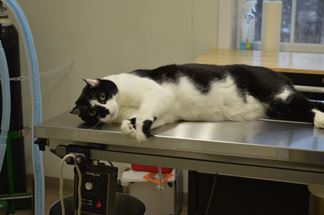 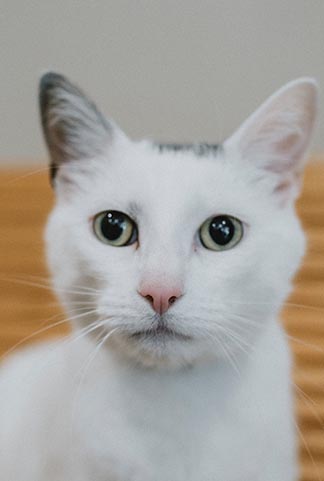 We know that we're not your only option for veterinary care. We don’t expect you to walk in the door just because we’re the nearest vet or the only hospital in our small town. We believe that you bring your pets to us because we care and because we provide the quality services your pet deserves.

Hebron Veterinary Hospital has been a full service compassionate and quality veterinary care center since 1984. Our office is located in Hebron Connecticut and we serve patients from all around Connecticut and specialize in our local service areas of Columbia CT, Glastonbury CT, Marlborough CT, Andover CT, Bolton CT, Willimantic CT, Lebanon CT and Colchester CT.